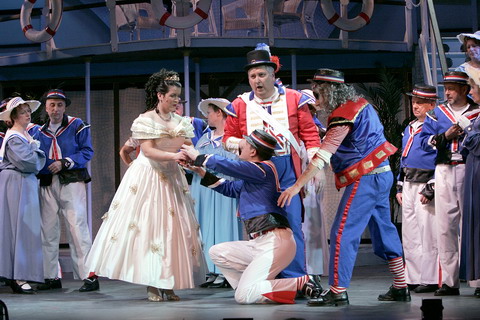 Friday night’s appreciative capacity audience, a queue at the box office for matinée tickets, and an almost full house for the Saturday evening, mean that there are many people in the Dunfermline area who enjoyed the entertainment provided by the Society, and who will be planning to come to our next show.]

As our review on the Wednesday night performance put it:.

. . . a first-rate show! A strong cast of principals, with nimble footwork by the crew, and some lovely ladies in fetching Victorian kit. In this story of true love requited, the stage villain gets thrown in the drink, Cousin Hebe finds her speaking voice and gets crushed (again!), and Buttercup’s gypsy blood reverses some fortunes as well as telling them. And the set has some interesting nautical features . . .

The company’s romantic leads made a fine couple, once they had finally confessed to their love for each other, and their singing drew deserved applause. The nimble footwork of Sir Joseph, Captain Corcoran and Josephine in the Act 2 trio merited their traditional encore, and the seeds of eventual romance were clearly (if mysteriously) planted in the duet between Buttercup and Pinafore’s Captain. Good support, as always, from a trio of British tars, though whether Dick Deadeye will ever be a soaring soul is a moot point!

Once again, Peter Macfarlane’s production makes good use of the whole of the stage – the company didn’t quite fall into the pit in the finale of Act 1 – and contains a deal of effective movement, creating some telling pictures. The support from the stage crew was exemplary – only one spill, which was dealt with expertly by a deck hand in character – and the orchestra, under Eddie Maclennan’s sure direction, pleased from the first notes of the overture.

One way in which this performance of Pinafore was different was that we were joined by the Woodmill High School Brass Group to perform an entr’acte at the start of Act II. Both the audience and the characters on the poop deck enjoyed the music arranged by Glynn Forrest, a percussion student at Woodmill who had just gained a place to study music at RSMD. His entr’acte used themes from Pinafore, but with a nod to a somewhat “drunken sailor” – surely not one of our tenors!

The brass group at Woodmill High School has been run for over 15 years by Steven Dowall, who was able to keep an eye on the group from the pit, where he played trombone. . Members of the brass ensemble were:

Grateful thanks to Ken Christie, who took the pictures below at the dress rehearsal. Hovering your mouse over the image area will pause the autoplay, or you can select a frame from the film-strip at the bottom.